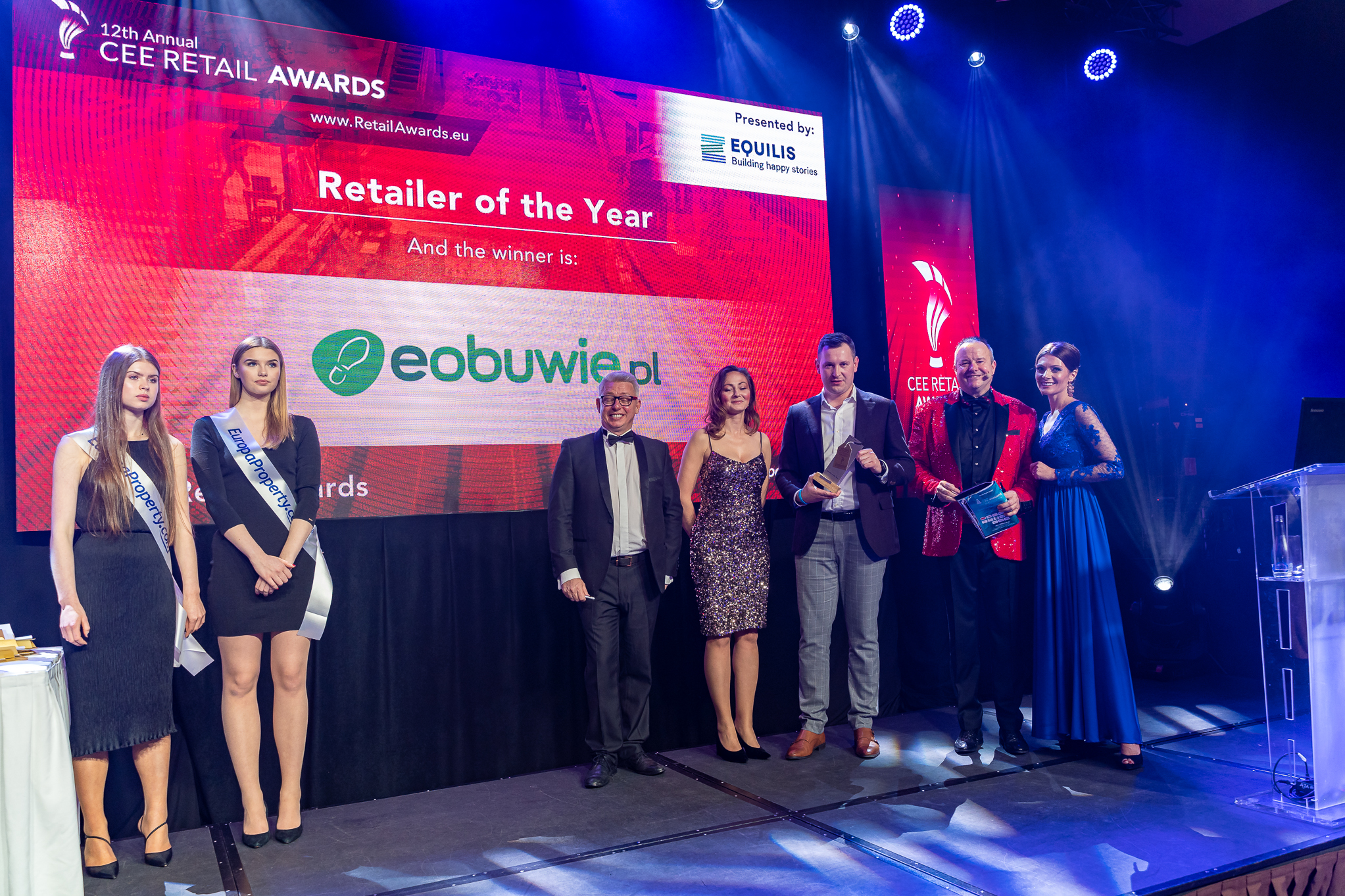 Footwear Retailer eobuwie.pl has blazed its way through one of Central Eastern Europe’s top awards ceremonies. In a significant boost to the retail real estate industry, the 12th edition of the annual EuropaProperty CEE Retail Awards, welcomed a record number of attendees, including over 100 retailers actively operating in the region.

The awards, held at the five-star Intercontinental Hotel Warsaw, brought together some 350 top real estate professionals from the major retail market sectors in the CEE region and were selected by an international academy of jurors, comprised of senior industry professionals, who presided and deliberated over the eventual winners, representing some of the best commercial retail real estate companies operating in the CEE region for 2019.

The big winner on the night was eobuwie.pl collecting wins for Footwear Retailer, Best Retail Innovation and Overall Retailer of the Year. The company was recognised by the jury for its continued expansion, innovation and omnichannel presence in the CEE region.

Putting his retail achievements firmly in the spotlight, Helios co-founder and President of the Board Tomasz Jagiełło claimed the Professional of the Year award, confirming his status as one of the region’s top real estate professionals.

In the much-coveted and highly contested Shopping Center Director of the Year award, Blue City‘s CEO Yoram Reshef shone the brightest out of all the short-listed nominees, by receiving high praise and recognition for his work on Blue City, currently one of Poland’s most diverse and popular retail destinations, which was also reflected in Blue City winning the Refurbishment Project award.

Trei Real Estate was awarded a couple of development awards, adding recognition to their ambitious development throughout the region. The developer won the Retail Developer and the Retail Park award for their Vendo Park Pułtusk in Poland.

2019 was an interesting year for retail development and the project award winners reflected the changing dynamics of the region’s retail development markets with many of this year’s project nominees forming extensions and refurbishments.

The biggest of which was the winner of this year’s “F Factor” award – a special accolade to the region’s top-performing retail destination offering the best in Fashion, Food, Family and Fun. The Manufaktura development in Lodz, owned by Union Investment and managed by Apsys, was deemed by the jurors as this year’s winner and was a popular choice on the night from the shortlisted nominees.

Other major accolades were given to IMMOFINANZ, which won Investor of the Year and was recognised by the jurors for its investment success in 2019. Another highlight on the night for the company saw them walk away with the Retail Park Chain Developer award for their growing chain of STOP SHOP centres throughout the region.

International consultants Colliers International picked up the Agency of the Year award. Additional company awards were presented to Dentons, once again recognised as the region’s best retail real estate law firm. TPA Poland continued to impress the jury with its stellar work and was awarded Tax and Financial Adviser of the Year and Professional Service Provider of the Year went to MK Illumination.

Commenting on the success of the winners, Craig Smith, CEE Retail Awards Organiser, said: “Having become an established leader, the CEE Retail Awards are a chance for our winners to reap the rewards their hard work deserves. It is with great pride that I wish all the winners a hearty congratulations and best of luck for the future.”

EuropaProperty prides itself on the validity of its awards and winners. The awards are given solely on merit and are awarded to commend those most deserving for their ingenuity, hard work, and success distinguishing them from their competitors and proving them worthy of recognition.

On behalf of our sponsors, judges and attendees, we offer our congratulations to all the winners. Foundations are already in place for next year’s event, which promises to be even better.

For further information about sponsoring, nominating, tickets or attending, please fill in the contact form & submit or email us directly: